“Vanning Ain’t No Joke.” This is all my friend Brad Parker said to me after showing him photos of this 1978 Dodge Tradesman 200 I was going to buy to live in. I had no idea what this meant at the time. I had no idea what I was doing. That little saying stuck in my head. I didn’t know why he had said that originally but I sure do now. Living in a van forces you outside your comfort zone. You are constantly learning and growing. You are always facing problems you have to overcome. You are always moving, always going...

After 4 years of living in a van, many people have told me they live in vans because of me or that I have changed their lives. That’s where this magazine comes from. I thought to myself. If I could change peoples lives just from living my own life and show it on Instagram then how can I do this on a bigger scale? Not only do I have tons of stories and information to share but I know lots of people who also do.

I called my brother Neal Eisler and my buddy Andrew Martyn and asked them if they wanted to start a van life magazine with me. We could change peoples lives I told them. After getting them on board, we got to work to make something we could be proud of...something that could not only change peoples lives but change peoples mindsets. I am really excited to share this first issue with everyone and can’t wait to share future issues we haven’t written yet.

Jack of All Trades

My name is Lee backwards it’s Eel. I have been living in a van since August 2014. In September 2015 I adopted the best doggy ever, and I named him Wander.....or Wander the Stubborn Sniffer! I used to do the normal thing. Renting rooms in an apartment or a house before living in a van. I was looking for an escape from the rent trap when I saw my friend move into his van. I made a pros and a cons list and decided I had nothing to lose. I could try living in a van, and if I didn’t like it, I could go back to doing what I was doing before. I got a van and started living in fully roughing it with nothing in the van. The thing barely drove at first. “Am I doing the right thing?” I thought to myself. Well, its 4 years later and I don’t think you could pay me to do what I was doing before. I’m living more than I ever lived before and doing the things I used to dream of.

My name is Neal. I’m a former business guy turned van lifer. How did this all happen? After 4 years of Product Management and Marketing for a software company my dissatisfaction level was at an all-time high...bored with my life...the repetitive cycle....work, work, 3 more days of work...all for the payoff...a 2-day weekend. The funny thing is when I actually enjoyed my job it was worse. Work never stopped. And, how did that pay off? One word, ‘Burnout!’ My apartment was no better. How could it be the dream to have someone living above, below, to the left and to the right of my floors and walls?? I felt trapped...when my brother, Lee, found out 2-months before my apartment lease was set to end, he did all he could to push van life on me. With no plans to renew and no clue where to go, my brother succeeded. He found a sprinter van on Craiglist..the exact buildout I described. That day I sold my Lexus. Later that week, I bought a new lease on life.

My name is Andrew.   I grew up in Pacifica California, its right by the ocean.   I love going surfing, cooking, and living in my van on the road.  Growing up the ocean was refuge for me, from school and the daily grind I just wasn’t a fan of.  I dropped out of college for mechanical engineering to do art and embark on a road of self discover.  Living all over the Bay Area and most briefly Los Angeles.   Living in a Van is the best choice I have made to make my dreams a reality.   Surfing and cooking by the ocean keeps me grounded through it all.  Not much else to say, I’m here to live my life while I have it and go with the flow, but mostly surfing, surfing is life. 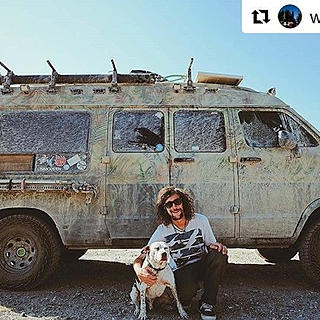 Woof, woof, woof! I woke up to Wander The Doggy Barking and the van was moving! I jumped out of bed, heart racing, unsure of what was...
132 views0 comments

While we were at the Rubber Tramp Rendezvous 2019 on Advencha Island in the Van Kookz Village the Van Kookz filmed one of their super...
60 views0 comments